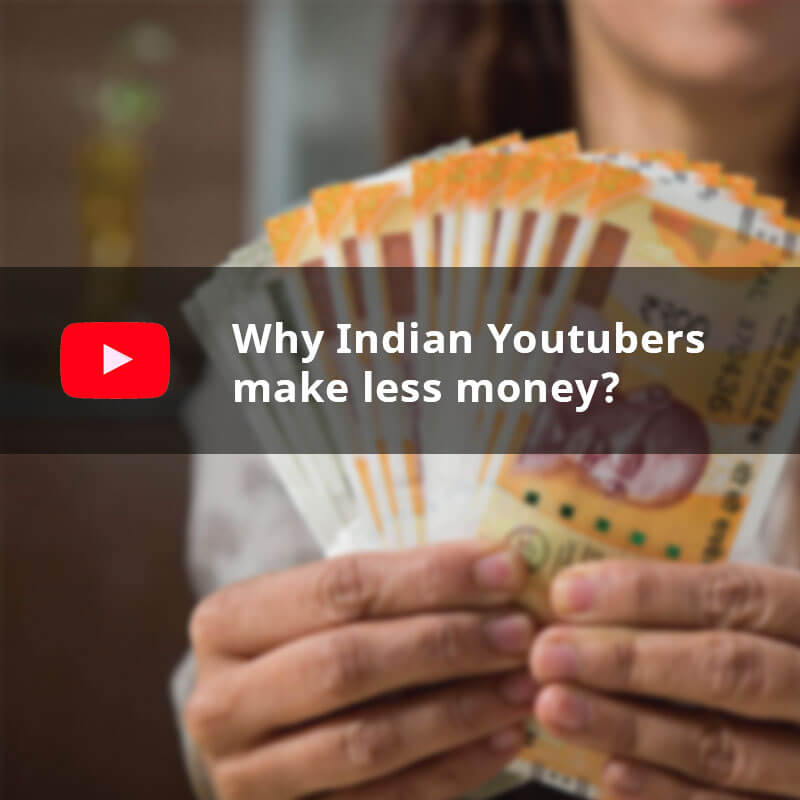 Despite being the second-biggest market after the US for Youtube, India is still lacking behind in Youtube earnings. There are many popular Indian Youtube content creators like Carry Minati, T-Series and so on, who have massive subscribers and followers compared to other popular content creators around the Globe. However, still, they are earning less than these global creators. Ever wondered why? This is because a big subscriber count cannot alone yield more revenue or income through Youtube ads. Several other factors involve deciding the earnings of each Youtube creator, like their country, audience, niche, etc. So, let’s see why Indian Youtubers earn less than the other YouTubers around the World.

Here are eight topmost reasons why Indian Youtubers earn less than the other Youtubers around the World:

As per the recent study and the latest Youtube RAF model, income per 1000 views varies for every country. Surprisingly, this rate is approximately $3.36 per 1000 views for India, comparatively lower than the other developed countries like Australia, Finland, the UK, Canada, etc.

Here are the top 10 countries with the highest CPM- Youtube Income Per 1000 Views rates your reference:

Saw the difference? According to the Top Dollar’s latest data, India’s CPM rates are 1/25th of other 71 countries. This is the primary reason why Indian Youtubers’ ad income is less than that of other Youtubers.

As fewer Indian viewers click on Youtube ads, Indian YouTubers earn less than the other YouTubers worldwide. That is why India’s CTR and CPC rates are lower than other developed countries.

Very few Indian Youtubers have the viewership from developed countries where the price of display ads is higher than that of India. The majority of Indian YouTubers only cater to Indian viewership, and thus the bids on display ads on their channels are also low.

4) Advertisers spend fewer funds to promote the Indian subcontinent than in other western countries.

Not only Youtubers but Youtube also earns (some percentage) through Youtube ads. When viewers watch a Youtube ad in a video, Youtube makes 30-40% of the total amount by advertisers. Sadly, the fund allocated for ad promotion in India is far less than the other western countries because the ad rate is cheaper in India.

(See also: What Is YouTube Shorts & How to Make Money From It)

5) India has low CPC for Youtube Ads than other countries

There are some niches on Youtube that has high CPM rate as compared to other niches, like:

All these niches have high ad bid costs as competition is high, but very few Indian Youtubers are working on these niches to capture a huge subscriber base. Those who create high-quality content with an impressive subscriber count in these niches earn pretty well through Youtube ads.

(See also: What Youtube Video Should You Make Next for Your Channel)

Youtube ads pay you in two forms of currency: Rupees and dollars, and we all know the Indian currency value differs a lot from other countries’ currencies. If an Indian audience views your content, advertisers will pay you in Rupees, which obviously is far less than what you earn in dollars (72 times higher) when your audience is International.

Your viewership also depends upon your quality of content, the language in which you are creating content and video quality. If you create content in multiple languages to cater to a global audience, your Youtube earnings will be more.

Here is a very useful article where you can find tips to improve quality of your YouTube videos.

So, these are some factors affecting the Youtube earning of Indian Youtubers majorly. If you want to make more money through Youtube ads, start working on multilingual content for a high CPM niche and cater International audience. After adapting these tricks, we are sure that your Youtube earnings will see drastic growth. For more such tips and tricks, keep checking our related blogs!