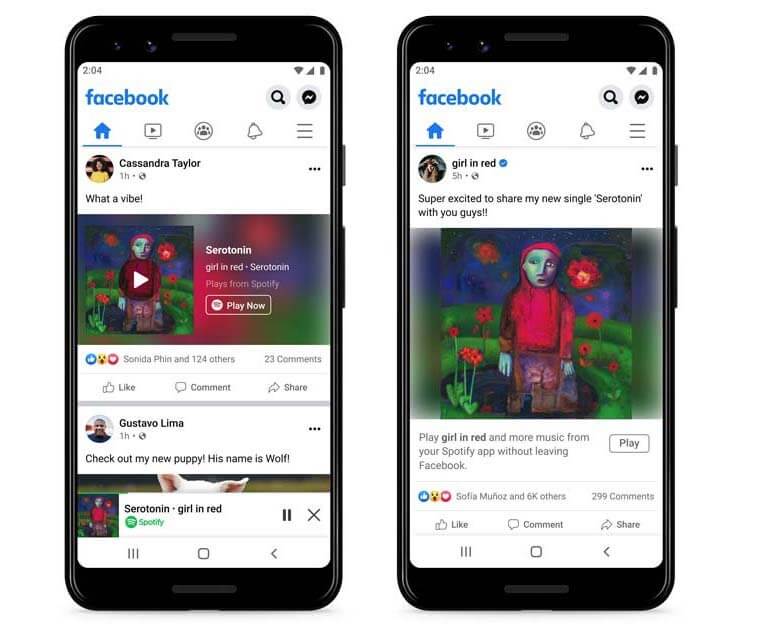 Facebook is one of the largest social media platforms Worldwide that keeps doing partnership with other platforms to better user experience on Facebook. Talking about its recent partnership, Facebook has partnered with renowned music app Spotify to roll a new “miniplayer” experience for its users. According to this partnership, now you can listen to Spotify music or podcasts via Spotify mini-player directly in the Facebook app on Android and iOS. This new feature will be available for both Spotify’s new and premium users.

According to this integration, Spotify users will now be able to share the content they are listening to or liked directly on the Facebook app using the existing “Share” menu of the Spotify (the three-dot menu at the upper right of the screen) and then select on either “Facebook” or “Facebook News Feed”.

Once the user shares any track or podcast from Spotify to Facebook, that post will appear in a new mini player allowing other people to play that track as they continue to browse their feed or reshare it. Users who already have the Spotify app on their phones, playing the track through Mini player will automatically take them back to the Spotify app, and playback will start there. But this will not ruin your Facebook browsing experience as the playback will continue even when you are scrolling your feed or minimizing the Facebook app. You have to dismiss the mini player to shut down the playback manually.

1) Tap on the “Play” button on the song that your friends or loved ones have shared on their Facebook feed.

3) For Those who are already using Spotify, the option will take you back to the app, and the playback will start there.

4) Spotify will keep playing the track while you continue browsing your feed and control the playback options in the background by manually operating the mini player.

If you are worried about your privacy after this integration, there is nothing to worry about. For premium users, this experience will be smooth and ad-free. But for free users, the playback will shuffle with some ads like it happens on Spotify.

However, Spotify will not share its user information base with Facebook to target ads on its platform. Facebook will only be able to access limited information about users taking up the integration, like their subscription type and metrics to analyze the performance of the mini player.

This partnership will benefit both Facebook and Spotify as Spotify can use Facebook’s broad reach to get more subscriptions and signups. At the same time, Facebook can retain users on its platform for a longer time. Apart from it, this partnership will also help Facebook to compete against its prominent rival Clubhouse (by Apple) in the future by launching podcasts and live audio rooms on its platform.