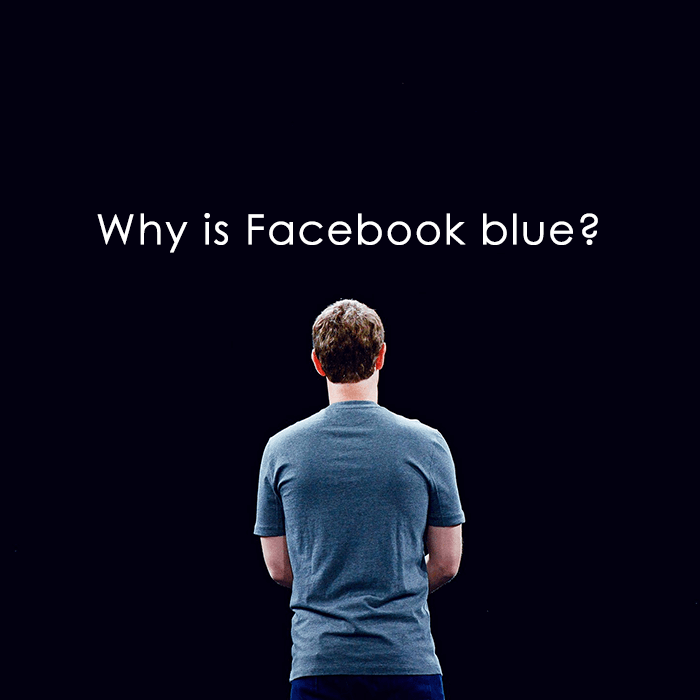 According to few reliable source, Mark Zuckerberg is red-green colorblind, which simply means that the best color he can see is blue. At some point, he referred Blue as the richest color, sounds like a possible reason for Facebook being blue. Apart from this probable reason, there is also a scientific reason which is about the effect that a color leaves on audiences mind and our purchasing decisions as well. The visual impact is quite a strong sense for humans, and hence, marketers try to impress the audience by using their ability of assessment.

General facts about colors in marketing

Apart from the marketing beliefs, there are some scientifically proven facts about the audiences’ age, mood and emotions which can be a trigger for deciding the color theme for a website or any social channel like Facebook is one example. For instance, sometimes there are obvious choices for a color to choose from Black, which is considered to be symbolic of Strength, power, professional, direct, definite and accuracy mostly used for corporate, construction, fashion, manufacturing, cosmetics, mining and more. While Green is considered for youth, natural, instructional, ecological, adventurous used for medicine, government, recruitment, tourism and human resource. And last but not the least Blue color is more of a symbol of clean, focussed, Judicial, business-like, credibility and more. The use is most inclined towards high-tech, legal, information technology, dental, corporate, recruitment etc.

A lot of big brands are trying to come up with something unique and create promising services for the audience or at least attract them by triggering particular emotions for a specific set of target audience. Especially the cosmetic brands focus primarily on the collar choose of the females which is mostly blue, purple and green. Even men are also inclined more towards blue, green and black. Brands like Dell, Vimeo, American Express, Ford, Twitter, Facebook and much more have built their identity still identifiable by using the same color with different tones. Though the similarity of color is visible yet they have been able to hold a different audience for each one. But for Facebook in particular, blue is the richest color of all as the New Yorker reported what Mark Zuckerberg believes and supports his statement with.

For those who want to improve on marketing in social media, there are certain criteria to follow as per the studies conducted on males and females preference. Based on scientific visual appeal, women and men have different tastes and depending on that brands are compiled to click the color. For example, women hate brown, gray, while men hate to prefer purple, brown and orange and what they love needs to be chosen as a common factor such as blue and green. They both are common choices among men and women. Here’s a hypothetical experiment to give the idea about the decision-making process that brands go through for finding out the right color for the button as it can really add into the conversion rates. So red and green were the choices of the button which denoted passion, blood, warning; and nature, go forward respectively. Hence, as per the A/B test, when its red Vs Green, the friendlier one i.e. green will be the clear winner. However, these are generalized meanings of both colors but red is also eye-catching and many marketers consider it for persuading the audience.