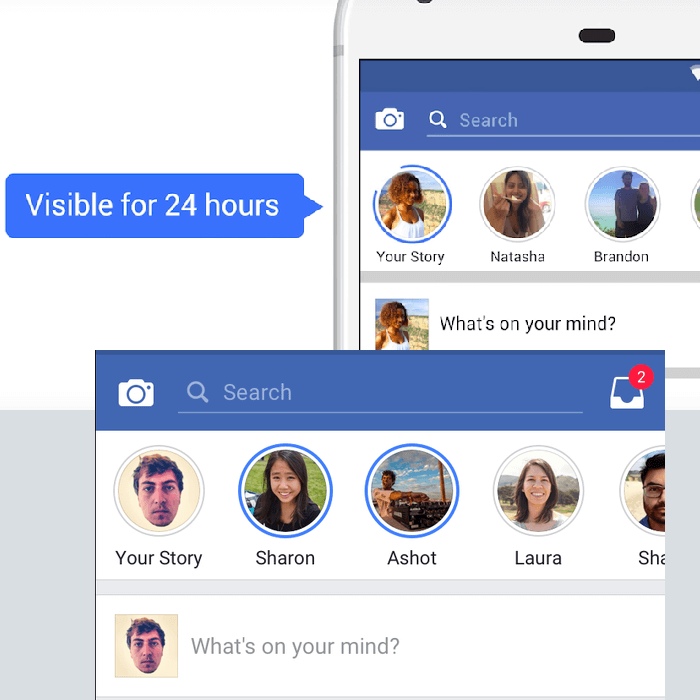 Facebook is again trying to integrate some of the popular features of Snapchat. The first trial was when it came up with 24 hours stories, for which the testing began in Poland on Messenger app. Later on, Facebook decided to adapt it and took it forward to test further on its mobile app. Likewise; it has now introduced few peculiar Snapchat-like features as a surprise for its existing users. Some of the cool updates are ready to use, not quite satisfactory in comparison to Snapchat yet gives a reasonable feel of it. Here are few additions that you will find in Facebook app:

If a user wants to capture a moment, luckily Facebook has to offer some interesting filters, which can be added on the faces or any kind of visual effect can be used to enhance the appeal of the picture. Also, geolocations can be tagged along with the images and videos. It would be a fun for the users, who are already aware of Snapchat stories and even for those who don’t know much about it.

Any camera content included in the story would be visible to top friends, which is very much similar to the Instagram stories. As per the setting, users will just have to click on a friends’ circle to look at their stories. It’s a unique customized feature for Facebook users, but is expected to work as its being liked and accepted on both, Instagram and Snapchat.

Also, you can instantly drop a message after viewing the story, a similar trait incorporated from Instagram and Snapchat. Facebook has allowed its users to give their immediate thoughts over the story; it’s a great way to know the honest opinion and genuine response from them. A smart move to rope-in marketers regarding promotional campaigns that can improve the rate of engagement it used to generate earlier.

Visual content posted on Facebook is not meant to be displayed by default on the timeline. However, users can choose them to be seen there as well and share it accordingly. This feature is soon to be introduced in other countries but for now it has few restrictions.

See also: Why Instagram is preferred more than Snapchat?

According to Facebook, nearly 150 million users are using Instagram stories, which almost more than Snapchat’s total users. Till now Facebook considers the camera-first sharing feature a success. The aim behind introducing the Snapchat features is to improve the reach and sharing activity on Facebook. Facebook claims to have billion users yet it decided to multiply the temporary stories concept so as to increase its reach. Statistically, Facebook has approximately 1.18 billion active users on a daily basis, now it’s evident to say that Facebook’s potential to inflate the consumption of the stories is far more than Snapchat and Instagram. The nature of being exposed to more users instantly is what temporary stories are known for; hence, Facebook’s attempt to adapt similar traits makes sense.

As per the paradigm of social media, Facebook is following the trend of the web world. It has to go along with the acceptance of the users.