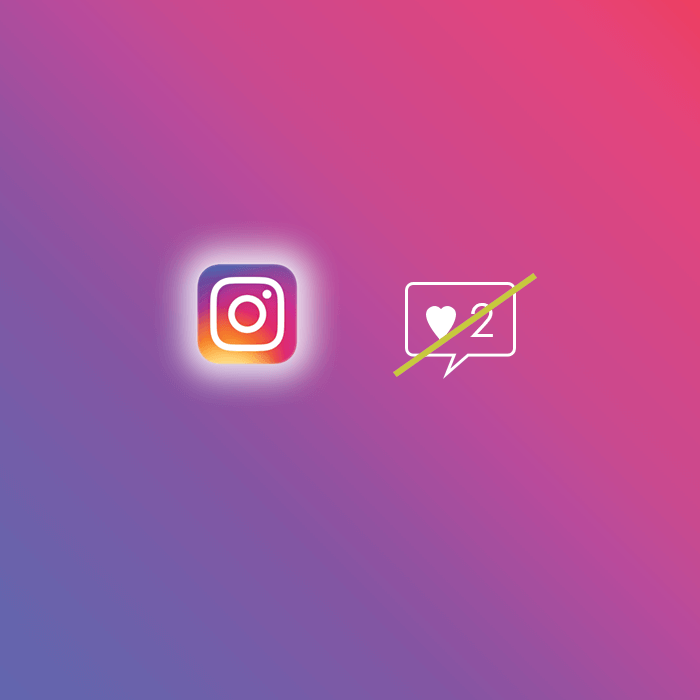 A recent declaration about removing ‘Likes count’ from the profile has made users unhappy. The numbers will be visible to the account holder, it turns out to be a big shock to most users. Find out more in this article.

Instagram came up with the idea to test the ‘hide likes’ update in selected regions. Last week,  it started out in the countries like Australia, Brazil, Japan, Italy, New Zealand, and Ireland. The official statement by Instagram seems to be in support of the users, it says,

This statement sounds almost like a betrayal to those who depend on ‘likes count’, yet so convincing and confident regarding the interest of users.

The news update was initially announced at the Facebook F8 Developers Conference this year and was implemented soon after in Canada.

‘Hide like’ update is about removing the likes count from photos and videos in the feed and profiles. The numbers will be visible to the account user only. It will still be showing a few names who liked the post, as you can see now along with the reply button. But the exact count of likes will not be shown on the post.

(See also: How to become a social media Influencer)

The reason stated by Instagram behind rolling out this update is that the users must concentrate on the content of the posts, and be more interactive rather than focusing on increasing the numbers in specific. It has been noticed that posts with fewer numbers are deleted by the users. According to many studies, an obsession for more likes have been observed, it is more about comparison in terms of likes count rather than the quality or content of posts. As per a report, the impact of social media on mental health is more negative instead of positive. Users do get a platform to express their feelings and feel unite as a community, but alongside social media’s impact is igniting anxiety, loneliness, depression, insomnia, and many other non-favorable effects on the users.

With this update, these negative factors are expected to be reduced to an extent.

As soon as Instagram posted the tweet, the topic started to trend across Twitter. People started to post sarcastic feedback about the news. And raised a concern about influencer marketing. Instagram hiding likes is the biggest tragedy in the history of social media updates ever. Users raised question about the interest of influencers, and this update would be big setback for them. 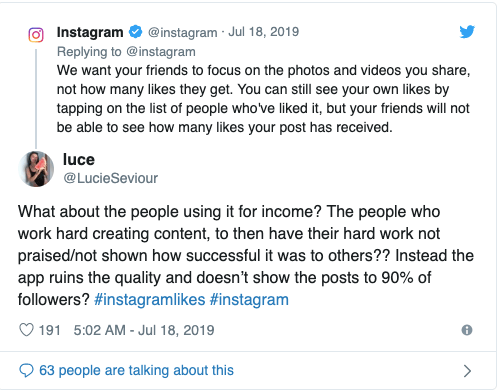 However, very few positive responses have also been noticed on Twitter about the hiding of likes count. Some are saying it’s a good initiative to preserve the mental health of the youth. Less pressure on the minds about the popularity was required to stop this never-ending chase for more likes.

Whereas, for others, it is going to reduce the interaction as it will break a major factor of relativity, which was likes count. Along with the pressure of popularity, the likes count also reflects the acceptance and growth of a message, which will lack after hiding likes count.

Soon after the maddening response and tweets about the update, suddenly took a shift on solving the issue for the users, especially influencers.

A tweet said, “If you’re upset about no one will see likes on your post, you can screenshot your private likes from your post and make a new post of it so people can still see how many likes you got and how popular you are just for your peace of mind” ;)#instagramlikes

Users are not ready to accept this major change yet. They are still looking for a quick hack to fix the issue.

Effect of ‘hiding likes’ on influencers

Instagram’s hiding likes count is a major concern for those who have developed a loyal community on Instagram gradually. Their existence and growth was primarily based on the popularity earned by counting visibility on a post. But this popularity will not be measured in terms of likes count as they will be hidden from the feed. Due to this, the influencers will not be able to convince or impress others on the count basis. This is an issue which was not addressed by the company, and the decision seems unfair for the marketers and brand promoters.

After this update, there will be no competition in terms of numbers, rather the content will get first preference. If it will be liked instantly, the followers will start to increase automatically. May be this likes war will shift to followers war, as when it comes to who is better than the other, numbers lay an important role.

(See also: Instagram Hiding Likes Count and Why Is It Bad?)

Therefore, if it is no more likes count, it must be about followers and more replies now. Instagram also indicated that the initiative is taken to make the content more interactive. When you are getting good response from the followers, the growth of your community is definite. Removal of likes will take away the reason to envy each other just based on number of likes.

The best influencers can do to get along with this extreme change is to focus on the quality of content and try to make the posts more interactive. From now onwards, the replies recorded after the post was shared would matter the most and the secondary factor will be number of followers.

For millennials, it is going to be a drastic shift to cope up with, as they have been dependent on the previous settings and cannot see another way of using it. Users activities used to be focussed to get maximum likes and that was somehow a criterion to declare a post as acceptable or successful. They followed this theory so strongly that the quality of content didn’t matter to them, it was just about receiving attention no matter what it is. The hide likes to update destroyed those unreal, self-made rules, and now it is about sharing things that are authentic and meaningful. It is no more a race, so make your posts sensible enough, even if you don’t know whether they are visible enough or not.

Having said that it is still to be found out how influencers can make things work again in their favor. It seems it is going to be more about content and not likes. So make sure you value the opportunity to post responsibly.