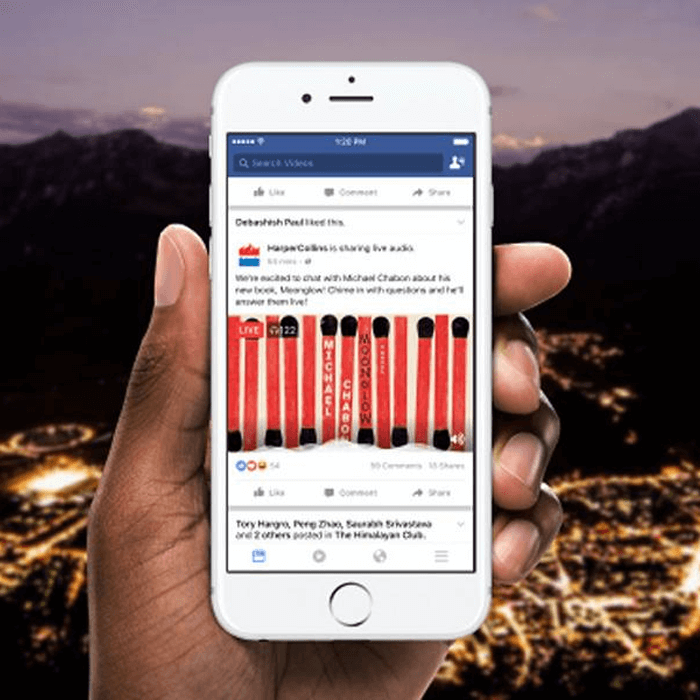 Facebook, the father of all innovations in the world of social media has been introducing upgraded mediums of sharing thoughts and ideas for its users. Beginning from the text posts to images, videos, live chat and now live audio feature very much similar to radio or podcasting. You might fall in love with Facebook’s new live audio feature, especially if you like podcasts. It’s going to begin with live radio broadcast shows and segments, which indicates that it can possibly broadcast concerts, recording sessions, family events and much more.

It’s a new feature attached to the live video plugin to broadcast directly to the social network. This feature enables you to use words instead of visuals, sometimes are words are more powerful to depict a story than visuals. That’s one of the major reasons behind introducing the live audio feature.

This would become an effective tool for those users who are willing to share but do not have appropriate internet connectivity. It’s an advantageous alternative for them to publish their ideas and thoughts through a podcast, which is equally valuable and effective as a live video is. The point is that it has to have a creative element attached to it; absence of visuals must be used as an advantage and should come up with dome unique story-telling and descriptions. This seems to boost the genre of radio-style programming, in fact will add some technological extensions to it that will give it an edge for innovative publishing.

Though podcasting is already a growing industry, but the culture of videos getting viral is not something that podcasts have experienced yet. But Facebook’s addition of live audio feature seems to change this trend, rather its small push of live audio into our news feed algorithm can become a reason of sunshine for podcasters.

Initially this feature is going to be tested with the selected few such as BBC (British Broadcast Company) world service (news radio), LBC (leading Britain’s conversation talk radio), Harper Collins (book publisher) and authors like Adam Grant (Originals, Pop Psychology) and Britt Bennett etc. Facebook expects this feature to expand with each year as its broadly accessible to publishers and users with creative streak. Live audio or video feed seems to be the priority for Facebook as recently, it came up with live 360 degree videos and Instagram having the DNA of Facebook rolled out live video feature.

This would be a very convenient and effective for the android users in comparison to the iOS users. Android users can easily close Facebook and continue other apps while live audio will keep on playing unlike in iOS. The biggest advantage for podcasters is its long four hour duration with such a wide range of content to be published such as:

This offering of real time content from Facebook is going to grow on fast pace. Earlier it was a tag of war between Periscope and Facebook live but the latter one is still on a much better end. A camera-shy user or a creative publisher can utilize this feature in its favor. Anyone who thought he had to look good to sound good can prove this theory wrong. Facebook has added a valid segment which will find its new dimensions, for an industry that was losing its grip in this highly impatient and impulsive world of visuals seems to find its anchor.