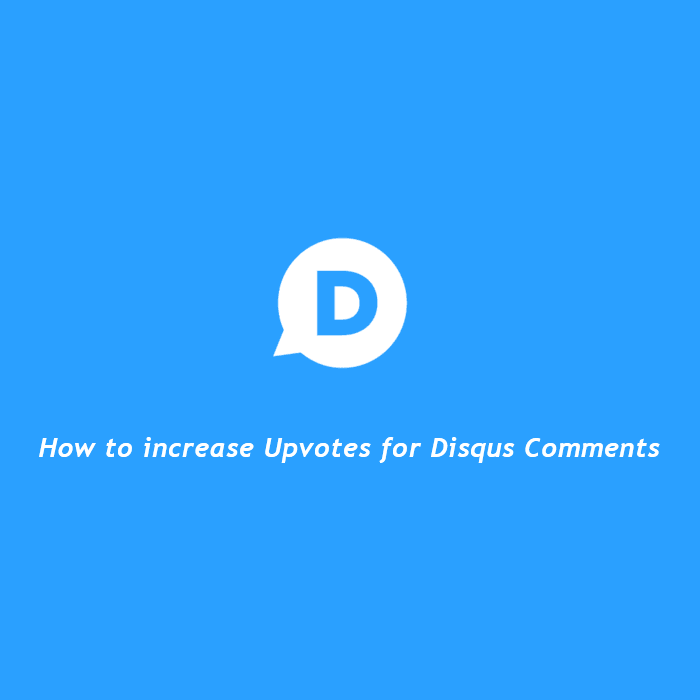 Disqus is a networked third-party commenting system that is typically applied to blogs as plugins or drop-in codes. Foregoing the native comment section of your blogs to use Disqus creates a uniform database of all your comments which can be accessed and responded to with ease and efficiency. The commenting systems of Disqus are enriched with more features than the default systems provided by Blogger, WordPress, et cetera.

What are the benefits of Disqus?

What are Disqus upvotes? Why should they matter?

Upvotes are basically “likes” received on a particular comment. The system is the same in all social media platforms such as YouTube, Reddit, and so on. The more the number of likes, the higher it goes in the chain and the more people see it. If you are a blog owner and/or a budding blog critic and connoisseur, knowing how to increase Disqus upvotes can be very useful as it helps you to reach out to more people and convey your views and ideas to them. In order to be a social media influencer, commenting regularly and winning a large number of upvotes is absolutely necessary.

So here we are going to give you a few tips on how to increase your upvotes on Disqus and pave your golden way to being a successful commenter.

Netizens invariably feel a shortage of time and they like to view and accept whatever comes first. A comment with thousands of upvotes on a famous blog gets a lot of attention. People look out for such people in other blogs and often look forward to reading more from such people. One of the most reliable and trusted methods which give a boost to your comments is to buy Disqus Upvotes. You can visit Socioblend website and choose the package as per your requirement—starting from 10 and ending at 100 upvotes.

This paid method is the quickest and surest way to get the maximum exposure and reach for your Disqus Comment.

Whether you have established a fan base or not, it’s important to regularly check for new blogs. Commenting first is especially important when you’re starting out so you’ll have to be on the lookout for new blogs and posts at all times. Mark a few famous bloggers and their blogs and comment on their posts without delay. When people see a common name and an interesting message in all posts, people are attracted to the mysterious figure.

Understand what the post is about and comment relevantly. Be concise and stick to the point. Don’t comment negatively when the post has the opposite vibe. If you want to be critical, make your comment light and not too harsh. However, on comedic (dank) posts, don’t hesitate to comment critically and hilariously. People love humorous yet substantial comments. Sometimes, you could inspire a discussion with a powerful comment. People love to share their opinions on a comment that asks their views on trending topics.

When you make a comment-worthy post and engage the audience to present their opinions on a particular perspective, or simply ask them to provide their take on the entire subject, your comment comes into the limelight and helps people to further think about the respective post. Keep responding to people who are writing on your comments and make them feel that you’re present, available, and listening to them. Remember that it’s always possible that you initiate a debate but be civil and respond without being personal or exceedingly aggressive. But don’t be the type of commenter for whom the only way how to get more upvotes is by polarizing the audience and starting a fight.

One of the foolproof ways to increase your upvotes is to utilize the opportunity presented by Disqus to comment using audio-visual files. An apropos picture, a relevant meme, or a hilarious GIF speak more than a thousand words in social media. A thoughtful caption coupled with a compelling picture can provoke others to comment further or upvote your comment. Spending some time in searching for the opposite response is usually very rewarding.

There are innumerable techniques that tell one how to get more upvotes but the thumb rule to be followed without fail is relevance. If people can’t see any connection between your comment and the post, come what may, you’ll not get more than a few upvotes. But of course, the shortest route to renown is to use paid services from third party websites. However, just like how the journey of the Karate practitioner begins with the achievement of the black belt, the career of the commenter-turned-connoisseur starts after he has bought his upvotes and built his base, name, and fame.